What is the history of Ulleungdo? (Introduction) 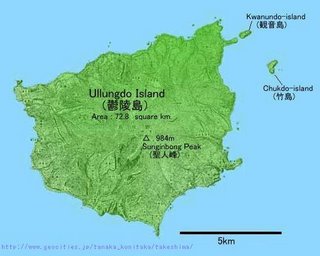 Ulleungdo (鬱陵島: 울릉도) is a Korean island about 134 kilometers off the South Korean coast in the Sea of Japan. It has a north latitude between 37 degrees 27 minutes and 37 degrees 33 minutes, and an east logitude between 130 degree 47 minutes and 130 degrees 55 minutes. Its dimensions are approximately 9.5 kilometers north to south and 10 kilometers east to west. It has a total area of approximately 73 square kilometers (km) and a circumference of about 56.5 km. There are a dozen or so peaks on the island, but the highest is Seonginbong (聖人峰: 성인봉), which is 984 meters high.

Here is a satellite picture of Ulleungdo.

There are several rocky islets just offshore of Ulleungdo, but there are only two islands of any significant size. The islands, which are located off the east coast, are called Kwaneumdo (觀音島: 관음도) and Jukdo (竹島: 죽도). Kwaneumdo is only about a 100 meters offshore, and Jukdo is about 2.5 kilometers offshore.

Ulleungdo, Kwaneumdo, and Jukdo make up what is called Ulleung County, which is under the jurisdiction of Gyeongbuk Province. Korea also claims that a small group of rocky islets ninety-two kilometers southeast of Ulleungdo are also part of Ulleung County, but Japan disputes this by claiming that the islets are Japanese. The Koreans call the islets "Dokdo," the Japanese call them "Takeshima," and the West calls them "Liancourt Rocks." The rocky islets have a total area of only about 0.17 square km, and have been occupied by a small detachment of Korean maritime police since 1954.

I believe that Liancourt Rocks are Japanese territory and that Korea is illegally occupying them. Over the next several weeks, I plan to examine the history of Ulleungdo and Dokdo/Takeshima and support my beliefs with maps and quotes from historical documents. Posters are welcome to comment on my claims in the comments section, and refute them with their own evidence if they would like. I only ask that you keep your comments civil.

I do not have all the answers. I am searching for the truth, and plan to make my search a learning experience. I am hoping that a good dialog with people who visit this site will help us all learn something. You already know where I stand on the issue, so feel free to let me know where you stand and to disagree with me where you will.